What is Inflation and How Can You Protect Your Money From It? 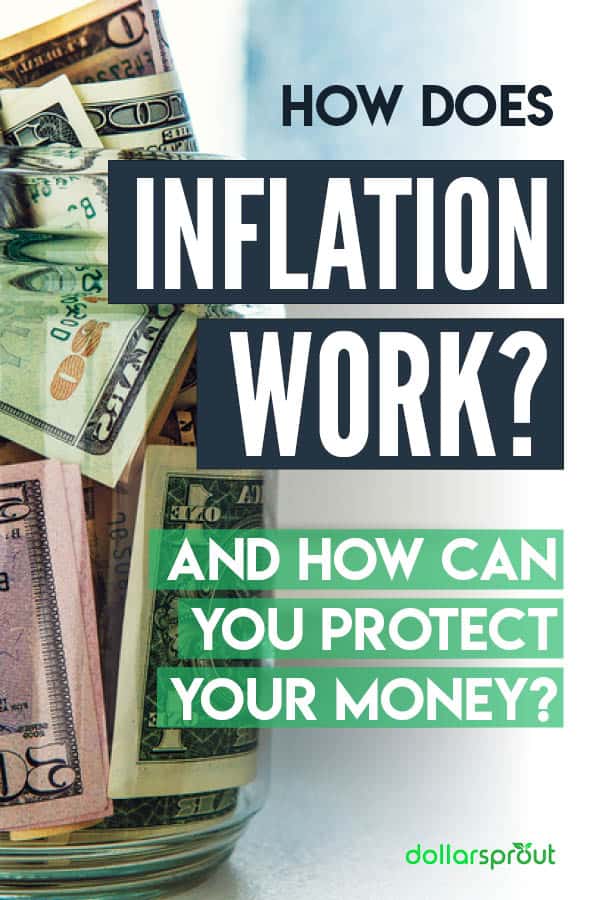 A dollar today doesn’t go as far as it did a decade or two ago.

Despite working harder than ever, it’s tough to make your paycheck last from week to week. Studies have shown that 43% of Americans aren’t able to afford basic living expenses.

From a pack of gum to buying a house, prices are increasing. This trend of rising prices is called inflation, and it’s a common occurrence in every economic system.

In a perfect world, your salary would grow at the same rate as inflation, making it easy to keep up with the rising costs. Unfortunately, that hasn’t been the case in recent years.

Inflation is when the prices of goods and services go up. It’s an economic term that describes how much a dollar is worth at any given moment.

At its core, inflation measures how quickly goods and services increase in value. With inflation, the price of everything rises. As costs increase, your dollar is worth less than it was before.

In the United States, the Consumer Price Index (CPI) measures inflation. To know how prices are changing, the CPI takes the average price of a collection of goods or services and calculates the change in value.

For example, you wouldn’t measure the different costs of every brand of shampoo or an individual loaf of bread. Instead, you’d average the price of similar goods and services — like food or transportation costs — to determine the annual inflation rate.

The Bureau of Labor Statistics measures prices each month. It creates a listing of goods and services that are commonly bought and used in an urban household. When the CPI is going up, that means inflation is rising, and the value of your dollar goes down.

How Does Inflation Work?

The higher the rate of inflation, the faster prices increase. And when prices go up, your dollar doesn’t go as far.

Your cash loses its value as inflation increases. That means if your savings plan is an old coffee can on the dresser or a locked safe in the bedroom, you end up losing money. Years later, your money isn’t worth as much as it was when you earned it.

The trouble with inflation is that your income doesn’t always increase to keep up with the rising prices. As the cost of living goes up, you’ll pay more for necessities like food, gasoline, and utility costs. Without an adequate rise in income, you won’t have much left for savings or discretionary spending.

Without an adequate amount of money available, you start looking for sales, using coupons, and finding new ways to be frugal. You also tend to spend less than you did before, and that leads to a slowing or stalled economy.

Over the past decade, inflation has remained quite low. When inflation is down, the prices also go down, and suddenly the cost of gasoline and food is cheaper. Since you’re not paying more for goods and services, the value of a dollar is higher, and you can buy more with less money. To further understand how inflation impacts your financial situation, you must learn the inflation causes and effects.

There isn’t a single answer to what causes inflation. It’s hard to pinpoint what drives it because the prices of goods and services affect each other.

There are many theories as to what causes inflation. The cost-push and demand-pull inflation theories are among the most accepted amongst economists around the world.

If companies are paying more for raw goods or materials, or raise the amount they pay workers, they often push those costs onto the consumer. This cost-push theory of inflation helps business profits remain steady because the consumer paying a higher price covers the increase in input costs.

A more complex example of cost-push inflation is the wage-price spiral. This is when wages increase and consumers start to spend more money, driving up demand. This increase in demand causes prices to rise, and rising prices create a need for higher wages.

Higher wages mean it costs more for a company to produce a product. The increase in production expenses pressures companies to raise prices, perpetuating the cycle. 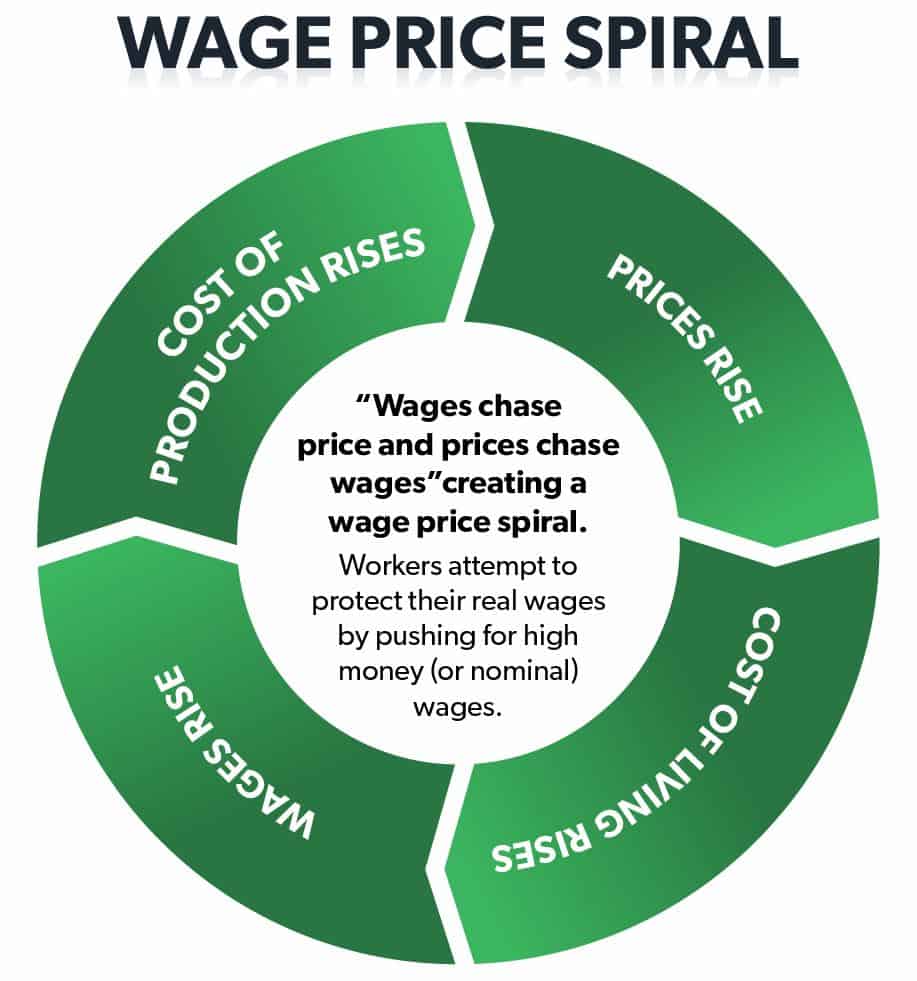 The demand-pull effect of inflation is tied to high wages and a low unemployment rate. When wages are high, you have more money left over from each paycheck to spend on whatever you want.

As additional people are trying to buy more of the same goods and services, the demand for those goods goes up. When there isn’t enough supply to fill the need, companies will raise the prices to balance supply and demand.

For example, if the demand for home renovations is rising at a rate of 4.5%, but the supply of builders and contractors is only rising at 3%, there aren’t enough workers to match the demand. This causes builders, contractors, painters, and electricians to charge more because you perceive those services as more valuable with the increase in demand.

During the past century, the United States has moved away from relying on the gold standard to determine the value of money. With nothing tangible to anchor it to, it now depends on how much money is in circulation and what people think that money is worth.

Since it’s no longer tied to the value of gold, the government can decide to print new currency and put it into circulation at any time. The increase in money supply of money dilutes its value because there’s more of it available.

If the money supply increases faster than the growth of the economy, it causes inflation. As with anything, the more money that’s available, the lower the value of each dollar.

Essentially, it’s the same line of thought that makes diamonds and other rare gems so expensive. The value of money drops if too much is printed because it’s no longer as rare.

Inflation infuses itself into every part of your life. It impacts the cost of living, mortgage rates, wages and salaries, and even your ability to go on vacation. It isn’t always a bad thing, and it could aid in a blossoming economy under the right conditions.

If inflation isn’t controlled or at a reasonable level, the unemployment rate rises, and you’re left without much money after you pay your expenses. Paying attention to the inflation causes and effects will help you understand how to protect yourself from inflation.

Inflation can control both your income and the price of goods, but the two aren’t directly related. They rise and fall at different intervals. At its most basic level, if your wages stay the same but prices increase, then you can’t afford to buy as many things.

This ability to buy goods is known as your purchasing power.

Ten years ago, you could buy a Hershey bar for less than a dollar. Now, it will cost you almost $2.00 even though you’re still getting the same amount of chocolate. You have to spend more money because inflation has decreased your purchasing power by making a dollar worth less now than it was then.

With money losing value so quickly, you’re inclined to spend more than you would have otherwise. This steep devaluation of money creates an environment where long-term savings can suffer as you’re encouraged to spend your cash rather than save it for a rainy day.

Inflation can lead you to take money out of banks and low-interest investments to buy a physical object that might better hold its worth, such as real estate.

Real estate is often viewed as a hedge against inflation. Since home values and rent prices tend to increase during periods when inflation rises, it could offer some protection for your money.

The best savings account at a bank will offer some relief, but the interest rates don’t always balance with the rate of inflation. On the other hand, it’s better than leaving your money under your mattress.

For example, if you borrowed $1,000 that you must pay back within one year, the amount you pay back isn’t worth as much because inflation has decreased the value of a dollar.

But if the inflation rate increased unexpectedly to 8% after the loan was made, the lender will lose 3% of the value of the money loaned to you because of the effects of inflation.

If you’ve been planning a trip to Europe, you may want to reconsider if inflation goes up.

When the value of currency changes, so does its exchange rate. If the dollar loses value, it’ll become increasingly difficult to buy things in other countries. Your money won’t have a good exchange rate against their currency.

If the value of the euro stayed the same and inflation caused the value of a dollar to drop, it would cost more dollars to buy one euro.

This is great for Europeans because they can now buy U.S. goods more cheaply. However, you’d have to spend more money to purchase products and services in Europe, such as flights, hotels, meals, entertainment, and souvenirs.

Inflation can change the value of a dollar in an instant. To best protect yourself from inflation, you need to invest your money in a way that grows as much as — or more than — the rate of inflation.

One of the easiest ways to do that is to invest in the stock market. There are also inflation-protected bonds offered by the U.S. Treasury. Treasury Inflation-Protected Securities, or TIPS, pay an interest rate that adjusts its value based on inflation.

The most important piece to protect your money from inflation is to pay attention to it. For short-term saving and spending, there is little effect. However, the best way to hedge your money against inflation in the long run is to start investing and growing your money today.

Amy is a freelance writer with bachelor degrees in business administration and legal studies. She has a passion for personal finance and is on a mission to help everyday families develop better money habits and escape the burden of debt. Her work has been featured on The Huffington Post, Money Tips, and various other personal finance publications. Amy makes her home in Michigan where she serves as a Girl Scout leader and teaches work-force development training to low-skilled workers in her community. When she’s not writing about money or perfecting her budgeting spreadsheet, Amy enjoys playing board games with her family and watching Marvel movies. 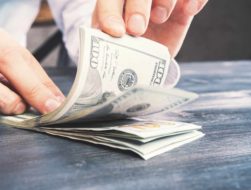 How to Become Rich: A Legitimate “Get Rich” Strategy for Real People

Becoming rich is available to anyone, regardless of their upbringing or education level. Here are some realistic strategies to get rich without winning the lottery or inheriting a large sum of money.